Want a job in IT? Study SFX-IT – Swedish for Programmers

Are you living in Sweden and looking for an IT-job? Then you are in the right place. Programmers are in high demand on today’s Swedish market. But it is not always enough to have technical skills. If you can speak Swedish, it will open the doors to Sweden’s tech industry and increase your possibility to land you the job you want. 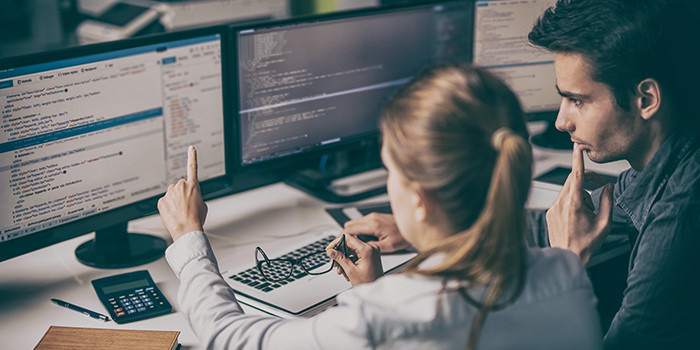 One of the best ways to improve your Swedish is by studying Swedish for Programmers (SFX-IT). It is a flexible form of education that will enhance your chances of having a successful IT career in Sweden.

First of all, congratulations on a wise career choice. According to the Swedish Public Employment Service forecast, the future looks good if you have an IT education. There has been a shortage of educated labour for years now and expected to continue. That demand is driven by development in population as well as technology and digital advancements. Among the hottest professions in the forecast is IT specialists and programmers.

The truth is that the IT industry is having a hard time right now finding the competence needed. Digitalization and automation are strong drivers behind this development. IT competence is hard currency when companies look for ways to streamline their organizations. In the recently published business tendency survey Konjunkturbarometern, 50 per cent of the listed companies stated that they could not grow at the rate they wanted due to the lack of programmers and system developers. According to the European Commission, there is a shortage of 1 million programmers in Europe today.

But an excellent labour market for programmers is not always enough to land a job in IT. Not being able to speak Swedish isn’t considered a deal-breaker in Sweden’s tech industry, it can certainly be an obstacle.

IT + Swedish – your way into the labour market

Even when you have in-demand skills, it can be hard to find a job when you live in a foreign country. Sure, most Swedes speak English, and you can get around in Swedish society using English only. But to be a part of a community, and especially a workplace, it is a perfect idea to learn the language as quickly as possible.

While programmers are working in Sweden without knowing the language, the lack of Swedish language skills will hold many talents back from getting the job they want and deserve. Most job listings are in Swedish, so you risk missing many opportunities when you cannot see all the available IT jobs. Writing an application, a CV, or going through a job interview can also be challenging when you do not know the language.

Most employers may also prioritize applicants that speak Swedish. Even if Swedes are comfortable with English, the Swedish language is the core of each Swedish workplace. Everything from office chit-chat to internal and external communication will be in Swedish. It will not be easy to be a part of the team without the Swedish language skills. And the employers know this. Add Swedish to your IT-skills, and the doors will open for you.

Knowing Swedish will let you find the hidden jobs

There is also what is called “hidden jobs”. A lot of new jobs in IT created in smaller companies. These companies are very keen on finding the right person for the job, and usually, they do not have the resources for job advertisements or using recruitment companies. Instead, they scan their contact networks to find the right candidate. Your way into these networks is by knowing Swedish. Communicating in Swedish will grow your network, and your chances to get one of these hidden jobs.

SFX-IT – the flexible way to study Swedish for programmers

There are many good ways to learn Swedish, but there is also a difference between Swedish and Swedish. Most foreigners that are new to Sweden enroll in Swedish for Immigrants (SFI) classes. While SFI is a great way to learn the language, and how the Swedish society works, these classes not designed for programmers. You could say that IT is a language of its own, and IT terminology is very different from other workplaces.

SFX-IT focus on Swedish for programmers, it is a flexible form of education that will let you study professional Swedish, combined with programming. It will allow you to learn Swedish quickly, build on your IT skills, and become available and attractive on the Swedish market.

You have the flexibility to choose to study in a classroom or online. Classroom studies are about 15-18 hours per week, daytime, where you learn Swedish as a second language, focusing on IT and programming. You can also study at evenings online. Those classes are about three hours per week in a virtual classroom where you work a lot on your own following a course plan with assignments, tasks, and webinars. Studying online is the right solution if you are already working as a programmer, but you need to learn Swedish to continue working in Sweden.

Swedish is not the only language you can learn at SFX-IT. The course content is professional Swedish from beginner SFI C to advanced level, and Swedish including a course in the programming language C#. There are also optional courses in programming with Javascript or C#. It is always good to improve your knowledge and to learn new programming languages.

This combination of Swedish for programmers and programming languages will open the doors for you to get a good IT job in Sweden.

Find out more about Swedish for Programmers